The submission log may prove useful if you have a dispute with HMRC about how much tax or NIC is due, as it contains a complete record of the exact information that has been submitted to (and received by) HMRC via your RTI returns.

1) Make sure that you have the appropriate payroll file open for the tax year in question, then click ‘Tools‘ then ‘Online Filing‘ from the main menu, and select ‘Submission Log‘

The submission log is divided into three sections – the tabs along the top allow you to view the relevant information:

2) Single-click on a submission that you wish to view, then click on the ‘Details‘ button.

For successful submissions you then have options to view the ‘Sent data‘ and also the ‘HMRC response‘ by clicking on the appropriate button. (If the submission has failed then the accompanying HMRC error message will be displayed instead)

4) Click the button marked ‘Click here to view the sent data‘. This is the data that was sent to HMRC by Payroll Manager when you filed the RTI return. You will be presented with three options’

RTI submissions are sent to HMRC in a format called ‘xml’. These xml submissions typically contain up to 50 lines of data per employee, as well as information about the employer, the payroll software and many other items of data. This means that a typical RTI return may contain many hundreds or thousands of lines of data, making it relatively difficult to be read by a human. For this reason, Payroll Manager allows you to view selected items of data form the RTI return in a more user-friendly ‘report’ format, as well as giving you the option to view the full xml file if you wish.

Viewing data for the current pay period as a report.

i) Select the option to ‘View current period figures as a report‘ and click ‘OK‘. 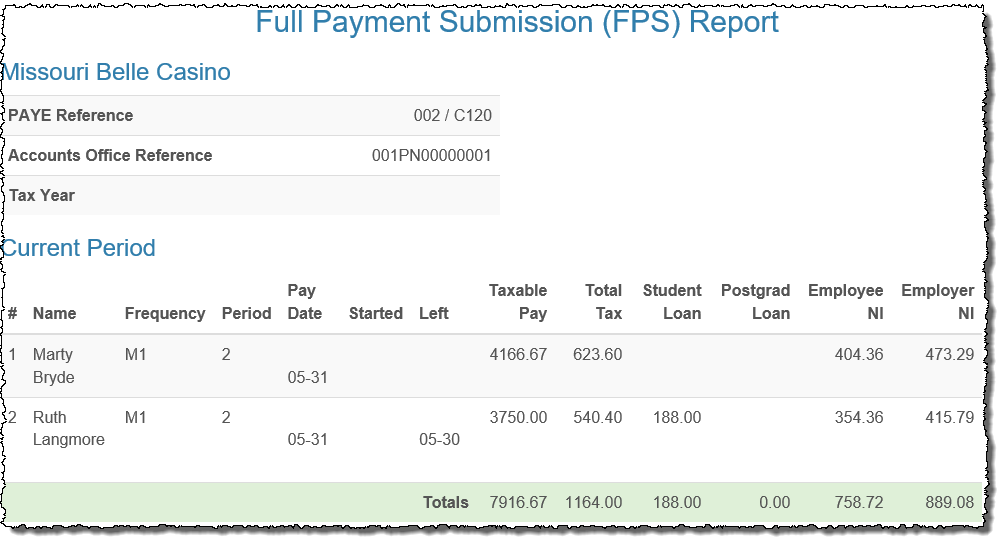 This report shows the taxable pay for each employee, and also the items that make up the employer’s liability to HMRC i.e. Tax, Student/Postgraduate Loan deductions, Employee NIC and Employer NIC. The report also shows the start date/leaving date of any new starters /leavers. The figures in this report are for the current pay period only.

Viewing data for the Year-to-date as a report.

ii) Select the option to ‘View year-to-date figures as a report‘ and click ‘OK‘. 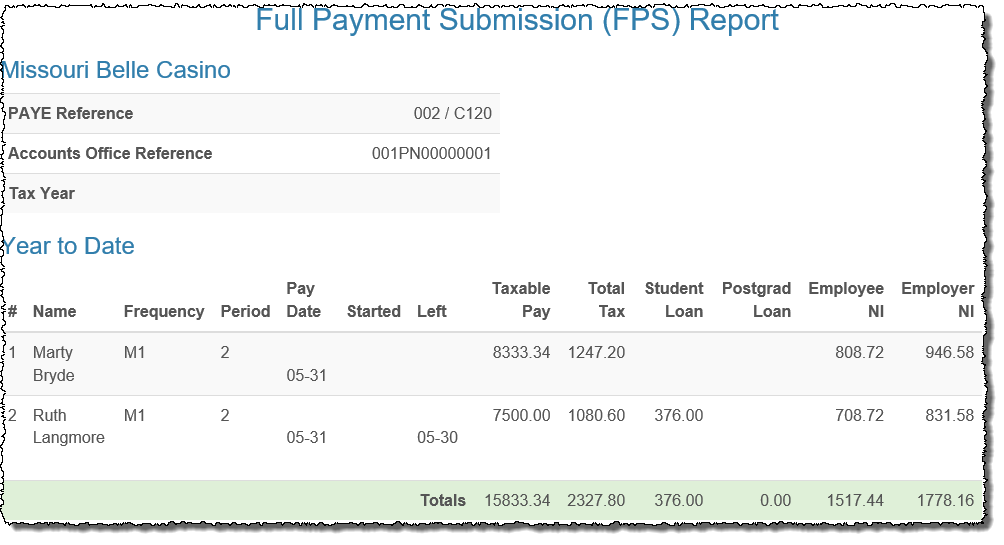 This report shows the taxable pay for each employee, and also the items that make up the employer’s liability to HMRC i.e. Tax, Student/Postgraduate Loan deductions, Employee NIC and Employer NIC. The report also shows the start date/leaving date of any new starters /leavers. The figures in this report show the cumulative year to date totals for each employee. 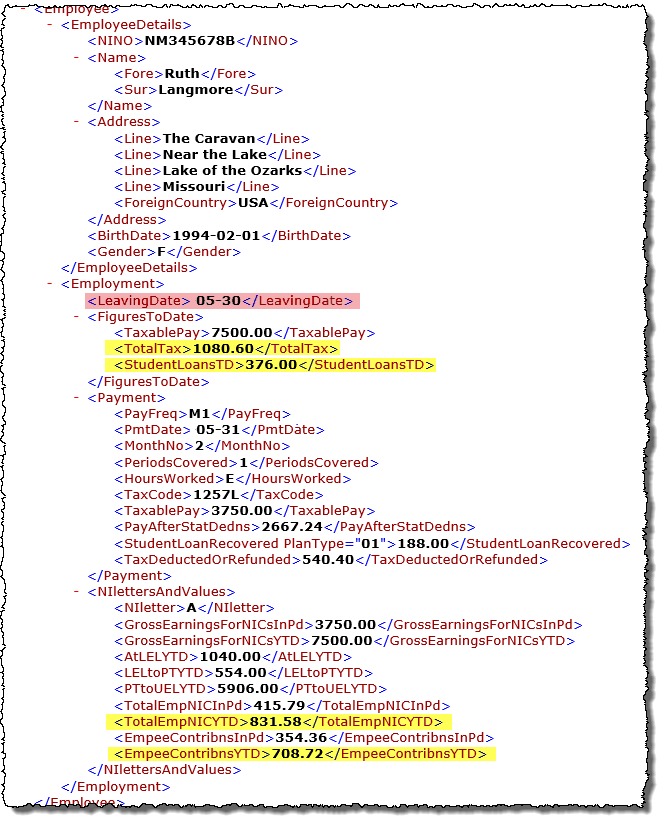 The complete RTI submission will appear on the screen, in the same format that it is sent to HMRC. This format is more difficult to read, but does contain every single piece of information that has been received by HMRC when you submitted that RTI return. The items highlighted in yellow are the year to date figures for Tax, Student/Postgrad loans, Employer NIC and Employee NIC.

How the ‘IR Mark’ proves that HMRC have received the data that you have sent.

When you go to the ‘Tools – Online Filing – Submission Log’ screen, then highlight an FPS and click on the ‘Details’ button, a report appears showing details of when the FPS was sent/received. Towards the top of this report is something called an ‘IR Mark’ (see the graphic in item 3 of this guide).

A new IR Mark is generated each time that you submit an RTI return. In order to produce an IR Mark, Payroll Manager takes every single character present in the body of the  RTI return (i.e. all of the alphanumeric characters present in the employees’ names, addresses, pay, tax, National Insurance contributions etc.) and then applies a formula (provided to us by HMRC) to that data. The resulting ‘IR Mark’ is unique to the contents of that particular RTI return.

On receipt of the RTI return, HMRC apply the very same formula to the data that they have received, and generate their own IR Mark.  The HMRC IR Mark is then reported back to the software in the ‘HMRC response’ to Payroll Manager. If the IR Mark of the ‘Sent Data’ (item 3 of this guide) matches the IR Mark of the ‘HMRC response’ then this serves as proof that HMRC have received the exact information (character for character) that was sent in that particular RTI submission, as HMRC can only produce an identical IR Mark if they have received identical payroll data.

The HMRC response contains lots of coded information (below), much of which can be ignored. The important information appears towards the bottom of the report, where you will see confirmation that the submission has been received by HMRC, along with the associated ‘IR Mark’

If you look at the IR Mark for each of your successful submissions to HMRC, then you will see that they all match. This serves as proof that HMRC have received the exact same data that you have sent. If HMRC later say that their systems hold different information, then this would suggest that something has gone wrong internally with HMRC own systems, as you can prove they have received the correct information from your payroll system.