If you notice a mistake in your payroll after filing your final FPS for the year you can make the relevant changes in Payroll Manager and then submit a ‘Year End Amendment FPS’ (YEA-FPS) to inform HMRC of these changes.. This is a new facility that was made possible by HMRC changes around January 2019, so depending upon when you installed updates to the program, you may be able to use it for 2019-20.  If you need to make a correction to 2018-19 or earlier, or cannot use this facility for a later year, then please refer to our guide Payroll corrections for tax years 2018-19 and earlier instead.

A YEA-FPS can only be sent if you have already filed all available FPS returns for the year using Moneysoft Payroll Manager. If you still have further FPS returns to make in the same tax year then you should refer to our Payroll corrections in the CURRENT tax year guide instead.

If the correction relates to a new employee that was missed off the payroll entirely then it is not possible to submit a YEA-FPS – instead you would need to use HMRC Basic PAYE Tools software to submit an Earlier Year Update.

This guide shows you how to submit a YEA-FPS.

Make the necessary corrections to the payroll first. You may need to unlock a pay period in order to do this by clicking on the ‘Lock/Unlock button on the toolbar (below) 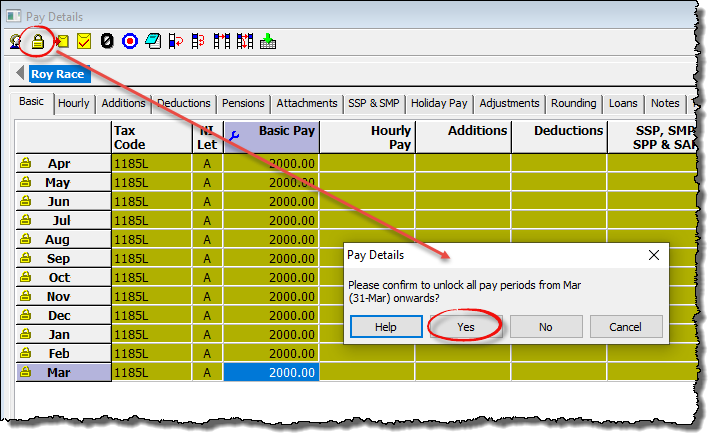 IMPORTANT – If you are editing a period other than the final pay period of the year for which the Tax & NIC has already been paid to HMRC then go to ‘Pay – Tax & NIC actually paid’ and record the amount that was actually paid to HMRC in the ‘Amount Paid’ field. This figure may be different from the ‘Total Due’ amount shown on the screen as a result of the changes that you have just made. In all cases you should ensure that you arrange to pay HMRC the correct amount due as a result of any amendments that you make.

After making your amendments, click ‘Pay‘ and then ‘Employers RTI Schedule‘ from the main menu in Payroll Manager. 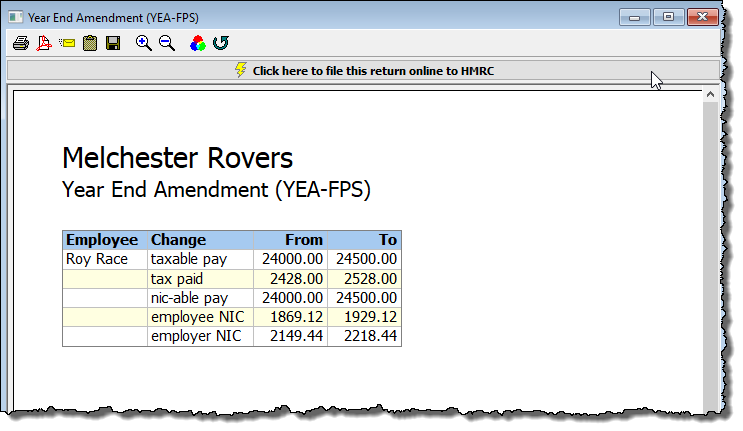 (In the example above, the year-to-date taxable pay of the employee has changed from £24000 to £24500 – reflecting the additional £500 paid to them in March. Tax & NIC figures have also changed accordingly.)

Click on the bar marked ‘Click here to file this return online to HMRC‘ to file the return – the submission will be made in the same way as other RTI returns.

IMPORTANT: – If the changes that you have made affect the parenting pay (SMP, OSPP, SAP etc) for one or more individual, then you must also resubmit  the final EPS for that year, as the amount of parenting pay that you can recover from HMRC will have changed. For details of how to do this please see our resubmitting the final EPS guide

– Does Payroll Manager keep a record of each YEA-FPS that has been submitted? Yes – details of all RTI submissions can be viewed by clicking ‘Tools‘ then ‘Online Filing‘ from the main menu in Payroll Manager and then selecting ‘Submission log‘.

– Can I file a YEA-FPS for 2018-19? – No, Moneysoft introduced this facility for tax years 2019-20 onward. To make FPS corrections for previous years you need to submit an ‘EYU‘, which can only be done from HMRC own Basic PAYE Tools software.

– Can I file a YEA-FPS mid way through the tax year to correct a mistake? – No- The YEA-FPS should only be used if you have already filed all FPS that were due for the tax year. If you still have further FPS returns to make in the same tax year then you should refer to our Payroll corrections in the CURRENT tax year guide instead., so that the corrections are sent in the next available FPS for that year.